Outbreak at a glance

Two fatal cases of Marburg virus disease (MVD) were reported from Ashanti region, Ghana. On 28 June 2022, these cases were notified to health authorities as suspected viral hemorrhagic fever (VHF) cases and tested positive for Marburg virus on 1 July 2022. An outbreak of MVD has only been reported once previously in West Africa, and this is the first time MVD has been notified in Ghana. An outbreak of MVD may represent a serious public health threat as it is severe and often fatal.

Description of the outbreak

On 28 June 2022, two suspected viral hemorrhagic fever (VHF) cases were notified to health authorities in the Ashanti region, Ghana (Figure 1). This region is located in the middle belt of Ghana and is the most populated region in the country.

The first case was a 26-year-old male who was a farm worker in Adansi North district, Ashanti region with a travel history to the Western region. Prior to symptom onset on 24 June, he arrived from the Western region to Ashanti region. He sought care at a hospital on 26 June and died on 27 June. The case was transported and buried in the Sawla-Tuna-Kalba district, Savannah region, which borders both Burkina Faso and Côte d’Ivoire. The burial was conducted before the results of laboratory tests for MVD were available.

The second case was a 51-year-old male who was a farm worker in Bekwai Municipal, Ashanti region. He sought care at the same hospital as the first case on 28 June but died the same day.

Both cases presented with fever, general malaise, bleeding from the nose and mouth, and subconjunctival bleeding (bleeding of the blood vessels in the eyes). Blood samples were collected on 27 June for the first case and 28 June for the second case and sent to Noguchi Memorial Institute of Medicine Research (NMIMR) for testing. On 1 July, both cases tested positive for Marburg virus by reverse transcriptase polymerase chain reaction (RT-PCR).  On 12 July, samples collected from the two cases were sent to Institute Pasteur in Dakar, Senegal (IPD) which confirmed the results from NMIMR on 14 July 2022.

Figure 1. Region of the two confirmed cases of Marburg virus disease reported in Ghana, as of 20 July 2022 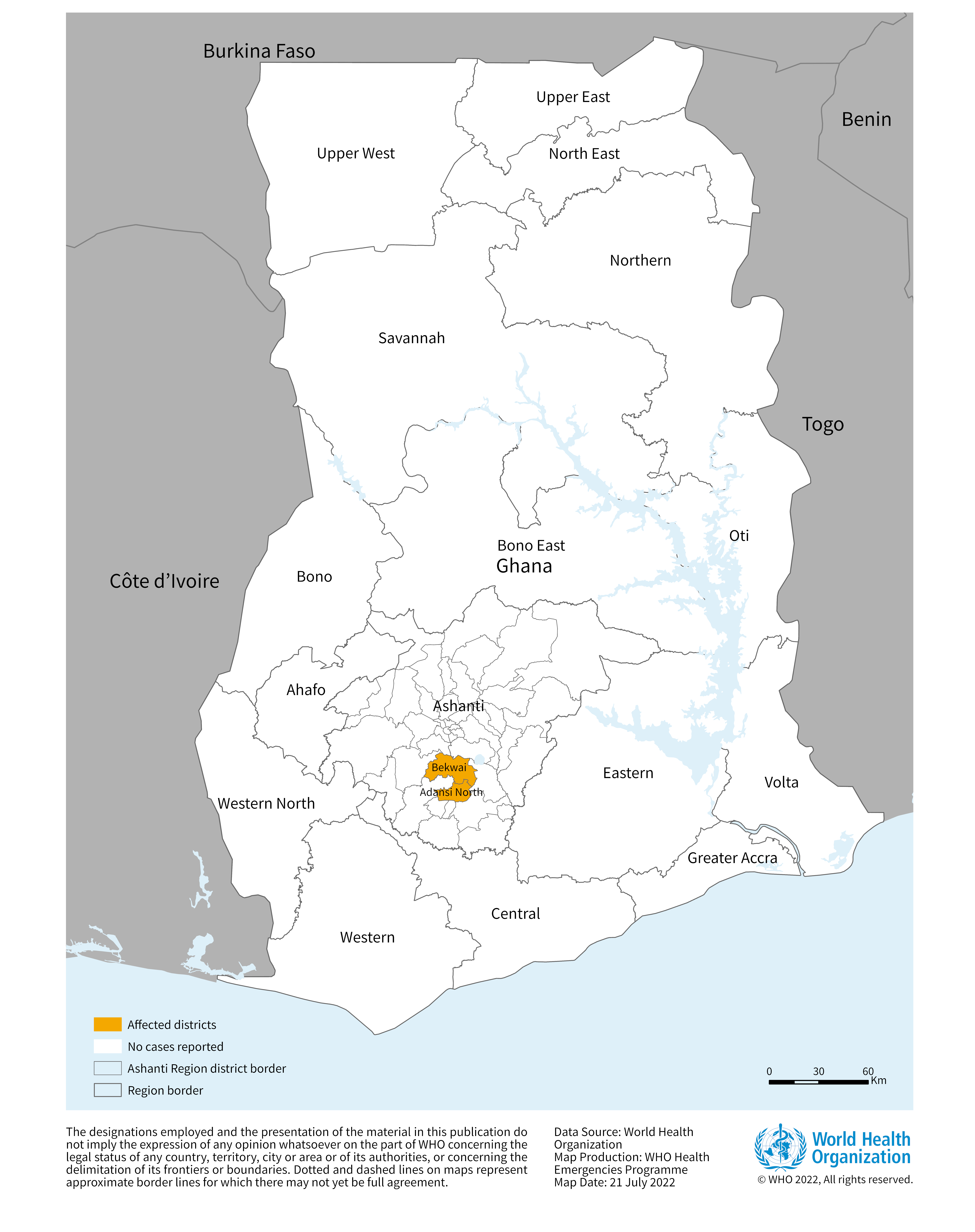 The source of infection is unknown. Preliminary investigations have shown that neither of these cases had a history of contact with dead animals, sick persons, or animals and had not attended any social gathering within three weeks of symptoms onset. Although both cases were farmers, they worked in different locations, and they have not been found to be epidemiologically linked. However, both cases came from communities living in a forest environment.

A cumulative number of 108 individuals (50 from Ashanti region, 48 from Savannah region, and 10 from the Western region) were identified as contacts of the two cases, all of whom were under self-quarantine and daily monitoring for 21 days. On 20 July, all contacts completed their follow up period. These contacts included health care workers and immediate family members of the cases. One contact reported some symptoms, but a blood sample that was collected tested negative at NMIMR on 7 July. All the other contacts reported to be in good health during the follow up period.

Epidemiology of the disease

MVD is an epidemic-prone disease associated with high case fatality ratios (CFR; 24-88%). In the early course of the disease, the clinical diagnosis of MVD is difficult to distinguish from many other tropical febrile illnesses due to the similarities in the clinical symptoms. Other VHFs need to be excluded, particularly Ebola virus disease, as well as malaria, typhoid fever, leptospirosis, rickettsial infections, and plague. Human MVD infection can result from prolonged exposure to mines or caves inhabited by Rousettus bat colonies. Marburg virus spreads through human-to-human transmission via direct contact (through broken skin or mucous membranes) with the blood, secretions, organs or other bodily fluids of infected people, and with surfaces and materials (e.g., bedding, clothing) contaminated with these fluids.

Although there are no vaccines or antiviral treatments approved to treat the virus, supportive care – rehydration with oral or intravenous fluids – and treatment of specific symptoms, improve survival. A range of potential treatments, including blood products, immune therapies, and drug therapies, are being evaluated.

In 2021, an outbreak of MVD was reported for the first time in West Africa in Guinea.

National and international coordination involving key partners are ongoing to respond to this outbreak.

The risk of this outbreak is high at the national level, moderate at the regional level, and low at the global level. The notification of two confirmed cases of MVD with a CFR of 100% (2/2) raises concern. The epidemiological investigation has not yet identified the source of this outbreak, which highlights the need to intensify the community-based surveillance.

There is a risk for this outbreak to spread to neighboring countries because the first case travelled from Western region prior to symptoms onset. The Western region shares a border with Côte d’Ivoire, and this may present a risk of transborder transmission if more cases continue to be reported or affect other areas. In addition, the first case was not buried safely in Savannah region which also borders Côte d’Ivoire and Burkina Faso. Therefore, WHO has assessed the risk of this outbreak as high at the national level, moderate at the regional level, and low at the global level.

Community engagement activities need to be carried out in the three identified regions in Ghana (Ashanti, Savannah and Western regions) with a particular focus on providing adequate information and support for the population to implement measures to prevent further transmission, avoid stigmatization within the community, and encourage early presentation to treatment centers and other necessary outbreak containment measures, including safe burials.
It is also important to raise awareness of the risk factors for MVD infection and the protective measures that individuals can take to reduce human exposure to the virus. Key public health communication messages include:

Outbreak containment measures should be continued and strengthened in the three regions of Ghana. These measures include:

Based on the current risk assessment WHO advises against any restriction of travel and trade to Ghana.

This is the tool we can't live without - creation of tutorial videos with @talkingdeck is a breeze, right out of… https://t.co/yucyIgAvVb

🥁Just launched a new plugin!🎉 It's a great tool for automatic generation of social media images. 👉Go to Codecanyo… https://t.co/o4164mnbgo

Thanks to you, our customers, and thanks to our devoted Bold Themes team we are celebrating 70k sales this week! 🥳 https://t.co/V5tLVtEUrQ